Serta Dzong in Kham, Eastern Tibet, has been a centre of Tibetan resistance since 2008. Peaceful protests have escalated in recent months amidst the Chinese authorities tightening control and increasingly violent crackdown. The events in late January testify that the Tibetan people’s struggle for freedom and dignity will go on even when faced with such brutal crackdown and systematic denial of the basic rights.

Following is a direct translation of reports received by an exile Tibetan based in Dharamsala, the seat of the Tibetan Government-in-Exile.

[[On 16 January 2012, two monks – Tepa and Nyinang – from Shorok village in Serta Dzong peacefully protested in the street by raising slogans and throwing pamphlets. Tepa is 16 years old and Nyinang is around 21. They marched on the large playground in Serta shouting Lha Gyalo (Victory to the God!) and Long Live His Holiness the Dalai Lama. They also threw large number of paper prayer-flags in the air.
Immediately, the Chinese security personnel arrested them. However, the local people managed to get hold of the two young monks from the police van. Since then the number of police as well as armed security personnel have increased everywhere and the people’s freedom has been limited. 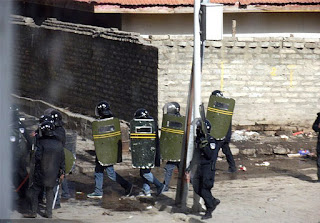 On 18 January, paper prayer-flags with Tibetan national flag at the back and various messages such as Long Live His Holiness the Dalai Lama, Victory to Tibet etc. were scattered all over Phu’u Yul in Serta Dzong. Yesterday was the day the Chinese people greeted the New Year with full smile and yet the suffering is increasing day-by-day for the Tibetan people.
On 22 January Dhonyoe Nyima from Upper Shol and Gendun Nyima from Lower Shol peacefully marched nearby the big playground in Serta shouting Bod Gyalo. Immediately they were arrested and tortured by the police. Dhonyo Nyima’s right hand was broken. Here is the photograph to prove the torture. 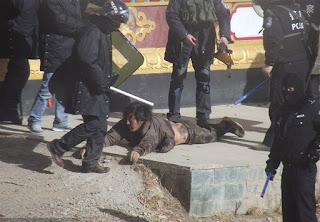 Likewise, in a street in Serta, an unknown youth has thrown a large number of pamphlets. Here is a copy of the leaflet.


On 23 a large number of Tibetans in Serta gathered on the large ground to protest against failed Chinese policies. A short video footage of the protest will be sent separately. It cannot be sent like the photos.
At around noon on Tuesday, 24 January, two people were shot dead in Serta Dzong. One was Popo and the other’s name cannot be confirmed. Popo was around 35-years-old. His mother’s name is Gedon and his elder son’s name is Kunsang. 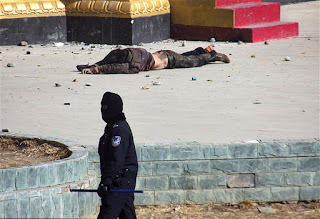 Popo died immediately and the other person, who hailed from Serwa Yango, was seriously injured and may die any time. Another person from Sholthal village was shot six times and is seriously injured. Kunga from Kou-tsa was shot on the shoulder and another woman was shot through the thigh.
Under the command of head of security personnel in Serta, the armed police have so far arrested over 40 people and others are banned even from going out of their houses.
Furthermore, another three Tibetans were shot dead in the afternoon of 24. Some say that this was not true. Others strongly confirm that two were shot dead before noon and three more in the afternoon. Another was shot dead in the evening. There were blood in the street corners from dead and wounded, and walls were poke marked with bullets. Those who witness the scene thought that many might have died.

The main slogans being raised in Tibet these days are ‘Long Live Dalai Lama’ and ‘There is No Freedom in Tibet.’ 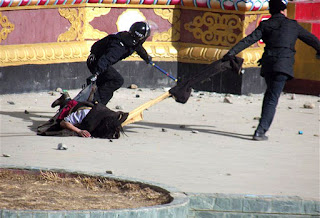 On 23 January, one person was shot dead, another was seriously injured and 32 others were injured. Many more may have been injured but they remain unknown due to severe restriction imposed by the Chinese authorities.
On the third day of the brutal Chinese crackdown on Serta by the Chinese security forces, I have been trying to call as many friends and acquaintances as possible in Serta, but in vain. Throughout the day, I tried to call both Serta and Drago, but could not get any one on line. I am aware that Tibetan activists and Tibet supporters are waiting for news, but there is nothing other than worry and anxiety.
However, it is not that one cannot get anyone. You can call the police station, government offices and other Chinese officials. Their lines were not cut off. I checked and called a couple government officials and they came on the line. But I put down the phone immediately and did not talk to them.
The phone lines of everyone else’s were cut and the hotels and restaurants were also ordered to be shut down.]]
Serta is now virtually cut off from the outside world. The arrests, torture and imprisonment are likely to follow in large numbers.
Posted by BaDSonam at 23:52