Under the Grey Veil 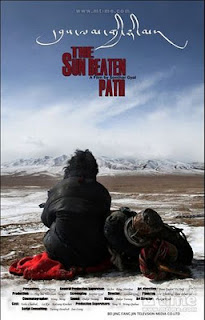 Sonthar Gyal’s (a young Tibetan filmmaker in Tibet) film The Sun-Beaten Path — which won 2011 Dragons and Tigers Awards at the Vancouver International Film Festival — is in many ways a trenchant criticism of today’s Tibet, where individual Tibetans battle against not only their tragic personal life but also against the overwhelming encroachment on their collective way of life and the wholesale eradication of their ancient culture. Gyal’s picture reminded me of actor-director Sean Penn’s Hollywood film Into the Wild, which combines two popular genres – the road trip and the struggle of man versus nature. It tells to tell about Chris McCandless, a disillusioned young man who discards his comfortable life so he can make his way into the wilderness of Alaska in search of untamed solitude.
Read more »
Posted by BaDSonam at 04:04 1 comment:

Fight of the Warrior Monks

At around 1 pm on 17 October, 20-year-old nun Tenzin Wangmo has set herself on fire while shouting ‘Free Tibet!” She is from the Mamae Dechen Choekhorling Nunnery in Ngaba in Amdo, North-eastern Tibet. Wangmo, who has died from burns, was the first nun and the latest case of self-immolation.
Sophie Richardson, China director at Human Rights Watch, writes that China’s “security measures designed to curtail the right to free expression, association, and religious belief in Tibetan monasteries are not legitimate.” Additionally, these measures have ratcheted up tensions as we are seeing in Ngaba. To date nine youths have set themselves on fire and more are most likely in line.
Read more »
Posted by BaDSonam at 21:15 No comments: