The Great Fall of China — 1

On 28 January 2011, the State Council Information Office and Bureau of the Ministry of Public Security of China issued the following notice to its people:
"For the disturbances in Egypt, media across the nation must use copy circulated from Xinhua.  Websites are to strengthen [monitoring] of posts, forums, blogs, and particularly posts on microblogs.  Our bureaus will forcibly shut down websites that are lax in monitoring." 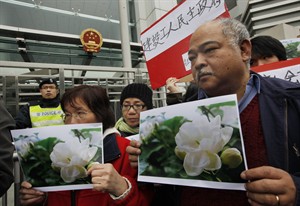 This was soon after the Jasmine Revolution ousted Ben Ali in Tunisia and the Egyptians were flowing into Tahrir Square, which ultimately led to the overthrow of Hosni Mubarak. People's protests are now infiltrating the streets of Beijing and other major Chinese cities, giving the Communist Party of China led by Hu Jintao splitting headaches almost to a point of nervous breakdowns. The harmony of the Party's absolute rule may be in danger.
Read more »
Posted by BaDSonam at 01:33 3 comments: