“Oh! You are still here,” said a monk, who I knew from my school days. “So good to see old Dharamshala faces who are still around.” He has come back for a short visit from the US, after twenty years. He fished out a five hundred-rupee note from his wallet, slipped it into my pocket and said, “Thi’i solja choe rog nang.” 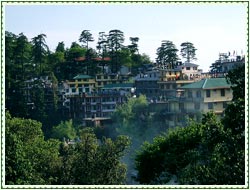 This made realize that I am now a pukka-Dharamshala-wallah or the ‘real Dharamsala resident’. Even the garbage can knows me, I fear.
Over the years, I have noticed, this place gets busier, restless and more energetic — hotels get bigger, food more varied, more tourists come and more things happen.
Materially almost everything is available here, including relatively good wine (very expensive though!), top-quality Manchester United soccer jersey and third-class Made in China nylon socks (if you wear these socks for three consecutive days, your feet will stink worse than over-flowing public toilet!) Today, I saw a new comer from Tibet selling yaksha kampo or dried yak meat and tea bricks, which he claims came all the way from Dhartsedo, a Tibetan trading town bordering China.

But what about some events to balance out the onslaughts of material progress?
This October/November Dharamsala experienced some of the most interesting creative events in the exile community.
‘Our Land, Our People’: a site-specific art exhibition
New York-based Tibetan artist, Tenzing Rigdol, clandestinely managed to bring out over 20,000 kg of soil from Tibet, which was exhibited at the Tibetan Children Village School for three days on a raised stage, larger than a basketball court.
Soil or dirt is intimately linked with the fate of humanity since the time immemorial. If there is no dirt there will be no human beings as our bodies are made up of the same five basic elements that the earth is made of. For a dispossessed people this link is even closer and more sacred. After all, who are we without the land and the dirt that we belong to?
Rigdol’s father died as a refugee in New York City without fulfilling his dream of going back to Tibet once, just once. This inspired the young artist to embark on this nearly impossible task, which took him seventeen months and countless headaches to complete.
“We have to dream big,” Rigdol said. His dream has enabled over six thousand people in Dharamsala to play, touch, feel, step, roll on, eat and take away soil from our land. Old ones cried, the young ones were awestruck and the kids played with the soil all day long.
Though Rigdol’s art examines the plight of Tibetans in exile, it has a wider resonance, exploring the notion of nostalgia, the idea of homeland and how art is intertwined with the political and the social. "It also demonstrates the transgressive power of art as an act of defiance," Rigdol's press advisory said.
First Tibetan National Poetry Recitation Contest
When I was in Tibet, an old woman told epics of King Gesar and the stories lasted for two to three nights depending on the episode. I later learned that she could neither read nor write. Gesar’s epics are mostly written in verse, very grand and magnificent. Similarly, farmers and nomads sing endless songs on fields and in the mountains. The words of these songs are often lyrical and very poetic. From these, I came to the conclusion, that we are a very poetic people.

But it took the exile community over fifty years to organize this first Tibetan national poetry recitation contest. Shingtsa Rinpoche and Wokar website made this happen, which took them nearly a half year. Over 200 poets participated in the preliminary contests held at various Tibetan settlements in India.
The final competition, amongst the top eight poets, was held at the Tibetan Institute of Performing Arts.
If dislocation, desperation, loneliness, love, longing and the endless struggle of being driven into exile can be boiled down to one single peak point, this was the summit. I think the fifty-year wait was worth my entire self in solid gold. Each poet recited his/her poem perfectly to the last teardrop, audience clapped, laughed and many cried. 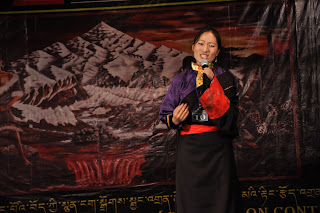 The poems include calls for long-separated mothers, invocations for freedom, remembering a grandma’s last words or a sharp cry for a lover who refuses to answer. Words were rich, lines were tight and the emotions Himalaya high.
The prizes too were worth fighting for — first prize = Rs.60,000 ($1400), second prize = Rs.40,000 ($900) and the third prize = Rs.20,000 ($450).
When it was over, everyone was drunk, drunk with poetry.
The Tibetan Film Festival 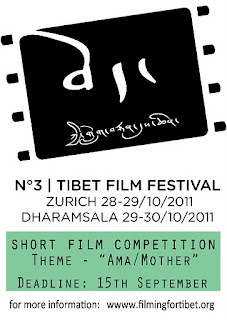 We had film festivals here before, but this one was different. The festival, jointly organized by SFT-India and Filming for Tibet, only screened Tibetan-made films. This was fantastic. After all, if we don’t promote our creative artists, who will?
The festival screened as many nine super-short films made by amateur filmmakers. The audience participations involved voting for the viewer’s choice, which carried $200 prize money, as well as discussions on films and its impact on the community. Young filmmaker, Geleck Palsang, won both the viewer’s choice and the critique’s awards.
The festival peaked with screening of Sonthar Gyal’s award-winning film The Sun-Beaten Path. Read review here: http://phayul.com/news/article.aspx?c=8&t=1&id=30278&article=Under+the+Grey+Veil+-+The+Sun-Beaten+Path
The other interesting events took place here includes SFT–Camp, Mind and Life Conference with His Holiness the Dalai Lama and 100,000 Poets for Change. SFT camp is a training young activist in non-violent strategies and online security speaking of which Tibet Action Institute's website and videos are must: https://tibetaction.net/2011/11/17/safetravels-https/
These are some of the major ones. Of course, other things keep happening here, which I won’t mention here less you get jealous.
So, if you are struck in New York the whole year round travelling in the subway and not seeing the sky, or if you are in California basking in the sun all the time or in London experiencing rain most of the time, take a break and come to Dharamsala in October and November. Roads are bad but the sky blue, we don't have central heating but there are enough Tibetan sights, sounds and smells to keep you engaged. If you have enough time, we will try to have more of the historic events that I mentioned above.
Posted by BaDSonam at 02:44