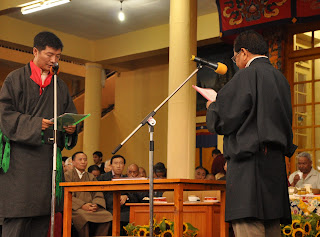 As the clock struck 09:09 on the morning of 08.08.2011 at the Dalai Lama’s temple in Dharamsala, the new Prime Minister, Dr. Lobsang Sangay took oath of office from the Chief Justice Commissioner. A few minutes later, the outgoing Prime Minister, Samdhong Rinpoche, handed over the seal of the office to Sangay. The seal, first issued by the Seventh Dalai Lama in 1751, signifies the legitimacy of the Kashag or the cabinet of ministers.

The timing of the handing-over has much significance as the great Indian teacher Padmasambhava, who was instrumental in bringing Buddhism into Tibet in the seventh century, was born on the same day. Eight is also considered as an auspicious number by the Chinese. It should, however, be noted that Mao died on 09.09 in 1976 after murdering over seventy million people during his twenty-seven-year rule according to his biographers, Jung Chang and Jon Halliday.
In his final speech, Samdhong Rinpoche stated that this “transition is from an older generation who lack modern education to a new excellent educated generation.” Sangay was born to a refugee family in India in 1968, and later won a Fulbright scholarship to Harvard where he earned a doctorate in law. During the election for prime minister, Sangay outperformed two seasoned candidates, both of whom were former ministers in the exile government.
It is apt that the Tibetans celebrate this new era of people’s empowerment with a new prime minister who has a very humble background, who will have far more power than any of his predecessors and who has contested his way to the top with the impressive articulation and a genuine desire to do something new and fresh. With this we can, perhaps, hope that the ‘era of the old monks is over’, as Rinpoche once described it to the London-based Guardian newspaper. With this new constitutional beginning, the Tibetans have shown to the world — and more importantly to China — that the issue of Tibet has never been personal to the Dalai Lama. With a democratically-elected leader, who is young, energetic and modern-educated, the Tibetans have reaffirmed and re-stated that the issue of Tibet involves the welfare of the six million Tibetans and their absolute right to self-determination.
Sangay’s ascent to the apogee of Tibetan politics through a genuine democratic process firmly asserts that the exile administration is the legitimate and sole representative of the Tibetans both in and outside Tibet. The Fourteenth Dalai Lama has now devolved all his political authority that dates back to the founding of the Ganden Phodrang Government in 1642. Though the Dalai Lama will always remain as the national leader in the hearts of every Tibetan, Sangay today is the highest elected leader and clearly has His Holiness' blessings and complete trust. Therefore, the new Prime Minister inherits the legitimacy to lead all the Tibetans in their struggle.
However, China intentionally looks at this through a different prism. Immediately after Sangay was elected as the future Prime Minister of the Tibetan Government-in-Exile in April 2011, the Chinese Communist Party (CCP) said that Sangay’s “appointment” is just another “political show by the Dalai Lama.” A report in the state-run Global Times stated that the “Dalai Lama moved one step closer to retirement when his self-declared government-in- exile picked a new ‘leader’ – a Harvard graduate who has never been to Tibet.” Beijing went further branding Dr. Sangay a ‘terrorist’ in a report in the People’s Daily, soon after the preliminary election in March.
Why does Beijing spend so much time, space and energy maligning the new Prime Minister of the exile Tibetan administration? The answer lies in China’s lack of legitimacy to continue its rule in Tibet. After more than half a century of occupation, the Chinese administrators have failed to win the hearts, minds and trust of the Tibetan people. Instead they look across the Himalayan Mountains to the exile Tibetan Government based in India as their true representative.
This is clear from appeals such as this one — dispatched from Tibet by a group of university students during the election for the exile prime minister taking grave risk to their lives.
They wrote: “The election for the prime minister of the exile Tibetan Government, which represents the six million Tibetans, is a crucial event at a time when the exile Tibetan community has been enjoying democracy and freedom resulting in more political awareness, desire for change and marching on the path of freedom struggle…[We] appeal to the exile Tibetans to elect a prime minister who is bold and reform-minded, who has a strong sense of survival, with political vision and the ability to maintain the unity of our people.”
An overwhelming majority of the disenfranchised Tibetans inside Tibet put their faith and trust in the exile Tibetan government by giving it the legitimacy and the moral authority to speak on their behalf and to fight for Tibet's freedom. This therefore poses the greatest threat to Beijing’s rule over Tibet. And this is why the Chinese authorities relentlessly try to destroy Tibet's unity, including devising strategies to create discord among the exile Tibetans and to discredit the global Tibet support networks. This was made clear from the content of recently-leaked official Chinese documents. 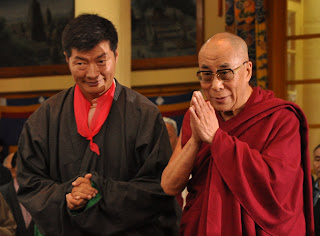 But no matter how hard Beijing imposes its increasingly harsh rule over Tibet, or arm-twists weak nations to disassociate themselves from the exile Tibetan government, the Chinese leaders will never have the legitimacy that Dharamsala enjoys. Just as Zhang Qingli — the much-despised Beijing-appointed Tibet's party boss in Lhasa — spews out bizarre invectives including calling Tibet's Nobel Laureate 'a wolf in monk's robes, a devil with a human face but the heart of a beast', Sangay steps with confidence into his five-year term as exile Tibet's popularly-elected leader. The fight from now on, as it has always been, is between credibility and dissembling, between democracy and dictatorship, between occupation and the struggle for freedom. If truth is to triumph, then the victor is already in ascendance. After all, "I pledge to you ... to strengthen and sustain our movement until freedom is restored in Tibet,” stated Sangay in his acceptance speech.
Posted by BaDSonam at 10:54