As I write this the long and apparently tech-savvy hands of the Chinese Communist Party (CCP) are busy making sure that no news of the great mass uprisings taking place around the world gets through the Great Firewall. 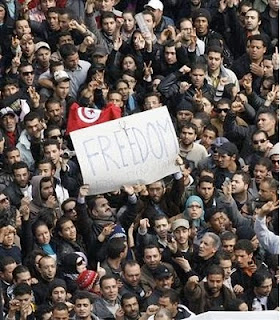 In the first weeks of 2011 a grassroots revolution in Tunisia [Tunisians prefer calling it the Jasmine Revolution] led to the overthrow of Ben Ali, the dictatorial president who ruled the country for 23 years. Not satisfied with a hastily-formed transitional government, people are demanding a completely new administration free from any trace of autocracy. In the same continent, hundreds of thousands of protesters are taking to the streets in Cairo, Egypt, demanding Hosni Mubarak to step down. Mubarak has been ruling the country with an iron-fist for over 30 years.

Just across the Red Sea from Egypt, another uprising is taking place in Yemen. The opposition leaders and students have joined the activists to rally against their corrupt president, Ali Abdullah Saleh. Saleh has been ruling Yemen dictatorially since 1978.

Demonstrations are taking place in Algeria, where the public anger is against rising food prices, corruption and state oppression, and Jordan, where thousands of people have taken to the streets demanding the prime minister step down and the government curb rising prices, inflation and unemployment. The king, Abdullah, is forced to call on the military to surround cities.

None of these popular people’s movements are seen, heard, viewed or read about by the populace inside China and Tibet. This is because the media — which is elsewhere termed the Fourth Pillar of Democracy, is the main tool in the hands of the CCP to prolong its rule. The “interest of the ruling party [is] above everything,” said Chinese writer, Qin Geng, in Time magazine.

While the people of China and Tibet are kept in the dark about these global shifts, the CCP is keenly watching these developments, which are an extremely sensitive issue for the ruling communist elites. They realise that the circumstances under which these global revolutions are taking place also prevail in China — the dictatorial rule, extreme inequality between poor and rich, rising food prices, massive social discontent and the occupation of Tibet. Kindling is dry and any spark from within or outside can set the Communist house on fire.

The dilemma that Hu Jintao and his gang face is that they can neither co-opt nor suppress these international events, however much they wish. All they can do is to blackout these dramatic happenings from reaching the Chinese and Tibetans. The party has already blocked the word "Egypt'' from the China’s popular Twitter-like service. Apart from such automatic knee-jerk reaction, I am sure the party is already perfecting its system to curb and crackdown should anything resembling these events erupt in China.

What we — as Tibetans living in and outside Tibet — can and must do is to watch these events with all the power of the senses we are endowed with. These are urgent times and there are vital lessons to be learned. The success of our freedom struggle in the long run depends largely on how we view, learn and apply in our struggle the tactics learned from these public protests. 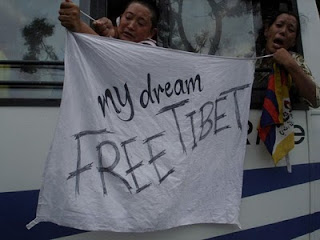 The conditions have also long been fulfilled in Tibet for uprisings such as these to blow up. In fact a series of past protests took place in the late 1980s and then came the overwhelmingly peaceful protests throughout Tibet in 2008, the biggest since the national uprising of 1959.

However, C. Custer writes in ChinaGeeks, “China is not Egypt.” Hence, using its military might and resources, the CCP successfully put down every Tibetan protest and the 1989 Chinese students’ demonstration in Tiananmen Square. Yet, Custer further writes, “…the spin machine is still running.”

Protests are happening in Albania, Peru, Chile and Bolivia against unjust policies and rising food prices. All of a sudden, the downtrodden and oppressed around the world seem to have risen to a new tune of global awakening — the need to fight for their rights. All of a sudden, Bob Marley’s message “Get Up! Stand Up for Your Rights!” is heard long after he left this world.

As we chant this catchphrase, Tibetans need to look for, pick up and learn subtle lessons and messages that these current global awakenings throw at us. What worked in Tunisia may not work for us. The struggle for freedom may be same everywhere, but we are facing a vastly different adversary. Thus we need to fine-tune our strategy accordingly.

Han Han, the Chinese popular blogger and author, said, “The Communist Party puts keeping their political position first above everything.” Towards this end the party is ready to take any measure including torture, execution, mass arrest, imprisonment, crackdown on intellectuals, and arm twist weaker nations and use business to force stronger countries to bend rules in its favour. The party lives under constant fear of losing its power and legitimacy. At this point of time, the CCP is on the edge of a nervous breakdown witnessing these global grassroots revolutions.

We have a vital lesson to learn here as well. In The Party: The Secret World of China’s Communist Party, Richard McGregor writes that “the party wants to control not just the government and the society of China. For sound political reasons, it needs to manage the narrative of China as well because if this narrative unravels it could devour them all.” This is the party’s weak point. Using the technological tools that we have at our disposal, we can unravel the false narrative. This compounded by sustained creative grassroots actions, can create great strides in our struggle.

However, the biggest lesson we can learn from witnessing these furious global uprisings for justice and equality is for us to have an organized resistance that can provide a clear vision and strategic direction. Having a clear goal, which in our case is freedom from occupation, will help channel the united strength towards achieving tangible victory in the struggle.

Personally, for me, the overthrow of Ben Ali in Tunisia’s Jasmine Revolution made me realise even more clearly that oppression too is impermanent.
Posted by BaDSonam at 06:38