Under the Crimson Sky

My review (written in 2010) of Nagtsang Nulo's book appeared in Yak Horns, after Dharamsala-based Khawa Karpo Tibetan Culture Centre published the Indian edition of Nulo's book in Tibetan. Following is the first three paras and the full review can be read in my book: 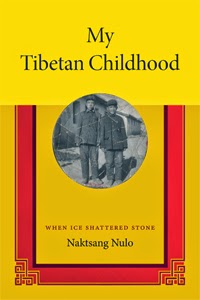 The day before the People’s Liberation Army (PLA) marched into his village in Northeastern Tibet, Nagtsang Nuden Lobsang – popularly known as Nulo – had a terrifying dream. Thousands of heavily-armed men on horseback galloped amidst dark clouds and dust, shooting everyone in their way. People were felled like willow trees cut by chainsaws. The eight-year-old Nulo had nowhere to hide and tried running after his father whose face was covered with blood. At this moment he cried out, ‘Father!’ Then Nulo’s cousin, sleeping alongside him, punched him in the belly to wake him up.
In January 1956, Beijing dispatched an additional 150,00 troops into Eastern Tibet. Over the next two years, the PLA imposed a campaign of repression and terror. Monasteries were destroyed and monks were tortured, sometimes burned alive and often forced to have intercourse with nuns right in front of the troops. Arrested Tibetan guerrilla fighters were crucified, dismembered, decapitated or sent to hard labour camps. Entire rebelling villages were decimated. News of these Chinese atrocities had already been trickling into the village where Nulo lived with his nomad family.


For a few days the villagers had been watching PLA troops gathering at a makeshift camp on the other side the river. Then, on the morning of Nulo’s dream premonition, monks at the local Tashi Choeling Monastery decided to stage a grand reception for the Chinese military in the hope that their monastery would be saved from impending destruction. The monks lined up on the sides of the approach road in their finest robes playing religious music usually reserved for high spiritual leaders, and holding white scarves in greeting. The Chinese troops marched in the middle of the road in their shabby uniforms, beating their drums and holding red flags aloft. They took up residence in the monastery and installed their radio and wireless radar equipment on the rooftops where prayer flags fluttered....
READ the full review from YAK HORNS available here:
https://secure3.convio.net/sft/site/Donation2?2060.donation=form1&df_id=2060&JServSessionIdr004=aaxbfa6sf5.app332b